The historic building reopens its doors with a culinary menu in which there is sushi, garden food and rice dishes for all tastes.
The opening of the Post Office not only means for the regional capital the recovery for the public use of an emblematic building, where thousands of Murcia processed their postal correspondence for fifty years (between the 30s and 80s of the 20th century), but it will enhance its leisure offer with a gastronomic complex in the center, where citizens can enjoy a varied culinary offer that goes from French pastries to sushi, passing through Italian and Mexican cuisine, the typical dishes of the huerta Murcia and a rice menu for all tastes.

The Post Office Market, in which the company formed by the companies Lonja de Murcia and Grupo Orenes has invested five million euros, opened its doors at noon yesterday with fifteen food stalls, which will be sixteen from next December 14, when the outside terrace is put into service, which will be used as a drinking space. In total, the leisure area offers an area of ​​around 3,000 square meters, with a ground floor where all the food and beverage outlets are located, a basement where the logistics part is located and two upper floors that will be dedicated to the celebration of all kinds of events.

A circular route
The Murcians and visitors will enter the building, which preserves the original façade and floor, through the main door that leads to Pintor Villacis street. In the center of the ground floor, around a central staircase of imperial style, there is a bar called La Central de Correos, which acts as the axis of the whole space. Users can make a circular route, where they will find the different positions that have been installed. As soon as you enter, turning to the left, El Timbre is located, a place specializing in sausage, mainly Iberian ham, and El Disparate, which belongs to the Murcian company La Parranda and will focus on the stews of the land. a wide variety of seasonal products, especially vegetables. Also from the Region is the operator Enso Sushi, which has the Moshi Moshi post, where it offers Japanese food. Ciao Bella is the Italian that never fails, while La Buena Correspondencia focuses on Mexican cuisine. The Seal is the corner of the salted fish, provided by Murcian businessman Diego Albaladejo, and the smoked ones, like the mojama and the dried bonito.

The tour continues with Abráseame Mucho, which will use charcoal to roast fish, meat and even seafood; La Bomba, specialized in rice of all kinds, mainly cauldron; La del Pulpo, with this product as the undisputed protagonist, and La Cocina de la Abuela, which will offer home-made empanadas, omelette and croquettes. The gastronomic route ends at La Estafeta, the sweet area of ​​the Post Office Market, with recipes for French pastries, chocolate, coffee, ice cream and artisan pastry.

To irrigate all these products are the drinks stands such as La Internacional, a bar focused on beer, and El Tintero, with 65 wine brands, with a large presence of those produced in the Region. La Coctelería and La Vermutería, on the other hand, will be located on the terrace when it is open.

To take into account
The raw material and suppliers are indigenous
All the raw material offered by the food stalls of the Post Office comes from the Region of Murcia, as well as most suppliers. However, only two of the operators (La Parranda and Enso Sushi) are from Murcia. Others come from the market in Seville.
Friday and Saturday, open until two in the morning
The Post Office Market will be open 365 days a year. From Monday to Thursday, as well as on Sundays, the schedule will be from ten in the morning to twelve at night, as established by municipal regulations. On Fridays and Saturdays the opening is extended until two in the morning.
Prices similar to those of the locals in the area
comparative carried out among the locals of the area. “You can eat well at an affordable price, although you can spend whatever you want,” says the manager.
The terrace will be covered and it will be called El Invernadero
The terrace of the complex, which will open in a month, will be covered and has its own name: El Invernadero. The objective of the promoters of this space is that it is air-conditioned, so that it allows the comfortable stay of the clients both in the winter months and in summer.
Half a million visitors every year
Half a million visitors per year. It is the estimate of the drivers of the Post Office Market, which also ensures that the leisure initiative involves the creation of a hundred direct jobs and an economic impact that can reach eight million.
Big P 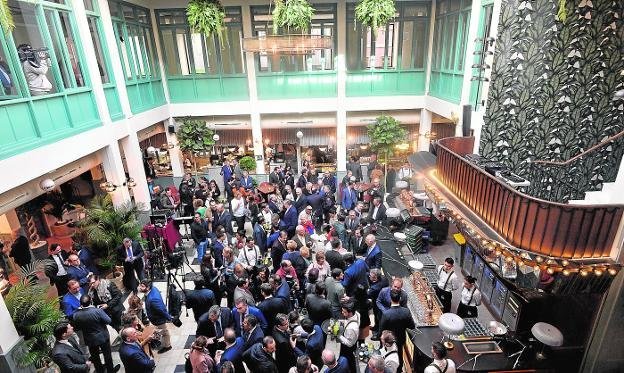 Ex-FARC commander calls for Colombia rebels to take up arms

Brazil’s Banco do Brasil approves plan to cut down on costs, personnel

Volatility Is Back in Argentina as Election Jitters Take Toll

Peru economy expanded 0.63% in May