The domination of Facebook by Italy’s two populist political leaders, Matteo Salvini and Luigi Di Maio, is revealed in previously unseen data that shows how they exploited video and live broadcasts to bypass the mainstream media and foment discord during the country’s general election.

The data, reviewed by the Guardian, reveals how the leaders massively expanded their reach with inflammatory and visually arresting posts earlier this year, eclipsing their main rival, the centre-left former prime ministerMatteo Renzi, on Facebook. 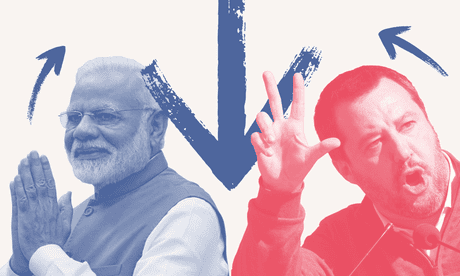 The Facebook data, which captured the engagement metrics on thousands of posts by the six major party leaders in the two months leading up to the election, was collected by academics at the University of Pisa’s MediaLab.

It reveals all of the 25 most shared Facebook posts in the two months leading up to the election were videos, live broadcasts or photos from either Salvini, who runs the far-right League, or Di Maio, the leader of the anti-establishment Five Star Movement (M5S).

The pair, who were rivals during the election but have since become deputy prime ministers in a power-sharing coalition, dominated Facebook traffic with viral videos and personal, off-the-cuff live broadcasts. Salvini and Di Maio also secured about 7.8m Facebook likes and shares each during the two-month campaign.

Their nearest rival on Facebook was Giorgia Meloni, the leader of the small populist far-right party Brothers of Italy, whose posts secured 2.6m Facebook likes and shares. Renzi, who posted more text-based updates than any other politician, secured just 1.5m likes and shares.

The least effective on Facebook were the former prime minster Silvio Berlusconi and the leftwing politician Pietro Grasso.

Prof Gianpietro Mazzoleni, of the University of Milan, who was involved in the Facebook research, said it was common for populist politicians to exploit social media, particularly during the “insurgent phase” of their rise, when they may struggle to get the attention of TV broadcasters and newspapers. “You can speak to the people’s guts on social media much better than on big media,” he said.

Salvini, whose Facebook audience of 3.4 million is larger than for any other politician in Europe, amassed the largest total of likes and shares for videos and live broadcasts. The far-right leader has intensified his use of social media since becoming Italy’s interior minister, using the platform to exploit tensions over immigration, publish reported “hate lists” of his enemies and provide Italians with a running commentary on his personal and family life.

Salvini’s most popular election video, according to the analysis, was a clip from a European parliamentary speech he incorrectly claimed had been “censored” by the mainstream media. “Be warned,” he says in the clip, “over the last few years Italy has taken in 600,000 fake refugees, not escaping war but bringing war here.”

Di Maio’s videos, by comparison, strike a different tone, railing against negative media coverage or political corruption, and they appear to have been widely disseminated by M5S’s young, loyal and digitally active voter base.

Only one Facebook post in the top 25 in the dataset was posted by Renzi. It stands apart from his typical updates on Facebook: posted after a long day on the campaign trail, it is an amateurish photo of a birthday cakethat his family had baked him and left on a table. Renzi’s caption said: “How nice: life is bigger than politics!” It gained more than 63,000 likes and shares.

In an interview with the Guardian in October, Renzi said social media had transformed politics, inflaming passions while simultaneously making voters demand a more responsive kind of politics. “Everything is different,” he said. “The citizens are angry, but social media makes you think: ‘OK the prime minister is exactly at my table.’” He added: “At the same time nothing changes, so there is frustration.”

Salvini in particular proved adept at exploiting that frustration through Facebook live videos such as one broadcast from a wall opposite a migrant holding centre. “They want to eat well and be at peace, and who pays for them?” he says. “We do.” In another, broadcast from inside a moving car, Salvini complains about a national song contest that featured lyrics about political refugees over “those who were born here”.

Dr Paolo Gerbaudo, from King’s College London, said of Salvini’s use of live video: “He does live streams almost every day, on the roofs of apartment blocks or on the streets in urban areas where he is himself holding the camera – as anyone would do – and that gives a sense of authenticity,” he said.

He said Di Maio’s focus on Facebook tallied with the strategic approach of the M5S, which was founded by the comedian and blogger Beppe Grillo and “defined itself from the start as an internet party”.

There is growing academic interest in the relationship between social media and populist movements on both the left and right. Facebook and Twitter have transformed western democracies, enabling politicians to bypass traditional gatekeepers and communicate directly with their base.

Some political scientists argue they systematically encourage the kind of simplified, divisive and caustic rhetoric populists often employ. There is particular concern in Brazil and India about the Facebook-owned messaging service WhatsApp, which has enabled the dissemination of viral fake news stories behind an encrypted firewall.

In France, the anti-establishment gilets jaunes movement that has rocked the presidency of Emmanuel Macron has been orchestrated via Facebook. Some researchers claim an algorithmic change enacted by the social media company last January to combat fake news and downgrade news content had the unintended consequence of fuelling protests.

Olivier Ertzscheid, a researcher at the University of Nantes, said Facebook’s chief executive, Mark Zuckerberg, hoped the algorithmic change would create “a new social infrastructure to bring people closer to their elected politicians and to allow people to become more involved in the political decisions of their country. The way the gilets jaunes movement was built in France shows that on this point of his strategy, he was absolutely right – it has fuelled the fire.”

US would be ‘disappointed’ if FARC leader is not extradited: ambassador