Thailand’s capital is well-known for its grid-locked roads. During Bangkok’s intense rush hour, only the city’s army of motorcycle taxi drivers keep things moving. Women, deprived of other economic opportunities and attracted by the freedom the job offers, are pushing into this traditionally male bastion of the national workforce. Nine hours a day, Kamokwan Sangngian, 40, transports commuters from On Nut Skytrain station, a few stops east of downtown Bangkok, to their destinations. She weaves her 150cc motorbike through narrow sois (alleys) and along traffic-clogged roads to get her customers home as quickly as possible. «I had a friend who was working at this queue, which happens to be near my house. So I asked her to get me an interview with the group leader.»

Tired of the factory work she had been doing, Kamokwan migrated to Bangkok from Nakhon Si Thammarat three years ago. Driving a motorcycle taxi is her escape from drudgery. She now works from 7 a.m. to 4 p.m., six days a week, which allows her to collect her child from school.

«I like the freedom the driving gives me. I can choose my work hours and spend my free time with my son. And I make good money. I can even afford taekwondo lessons for him,» she told the Nikkei Asian Review.

Riding a motorcycle taxi has long been the job of migrant men from the provinces, many who arrived in Bangkok in their tens of thousands following factory closures and massive layoffs in the wake of the 1997 Asian financial crisis which hit Thailand hard.

Italian anthropologist Claudio Sopranzetti interviewed hundreds of drivers for his dissertation on motorcycle taxi drivers and politics (Harvard University, 2013). The drivers, known as P’win, told him about itsaraphap, an abstract notion of freedom and independence that makes their stressful and dangerous jobs worthwhile. Sopranzetti notes that the quest for itsaraphap is «a central framework through which to understand life in contemporary Thailand.» The iconic orange vest worn by riders has become a desirable acquisition because of the freedom it promises. But prospective female drivers have to fight hard to enter a taxi queue, which is known as a win.

Kamokwan said: «When I first started driving, some men in the queue were teasing me. Once I had proven to be a good driver, the harassment stopped. Some male colleagues also tried to push me out of the job because of the fear of competition.»

Kyoko Kusakabe, a professor at the Asian Institute of Technology, is researching economic globalization and women’s work; women’s employment in the informal economy; labor migration and gendered mobility. She sees parallels in other male-dominated sectors in Thailand.

Kusakabe said: «At the beginning, the men make life difficult for their female counterparts because they are scared to lose their social status as hard workers if too many women enter their profession and perform just as well as they do.»

Chaloem Changthongmadn, president of the Motorcycle Taxi Association of Thailand (AMTT), says that about 200,000 drivers work in the city, operating from a total of about 6,100 win. There are no gender-specific statistics, but Changthongmadn speculates that 10% of all drivers in Bangkok are female. 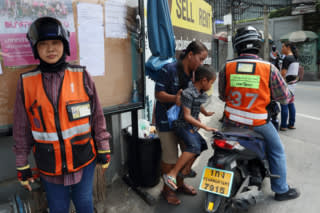 Somlit Lalert, the leader of the motorcycle taxi queue at On Nut Skytrain station in Bangkok (Photo by Tom Vater)

At the win in On Nut, seven of the hundred or so drivers are women. Somlit Lalert, 46, is its designated leader.

«I came with my husband from Trat 10 years ago. We started in this business together,» she said. «I was the only woman at the time. Then I was elected to be the win’s boss. Now women come almost every day and ask me if they can work in our queue. Once they see other female drivers in the line, they feel confident to do the same.»

In her administrative capacity, Somlit checks that everyone comes to work, attends meetings with police officials and authorities, informs her riders of new legislation and summons drivers who have behaved badly. She also manages private health insurance. All drivers pay 100 baht ($3) a month into a fund. If they fall sick, they receive up to 2,000 baht to tide them over.

«It’s a lot of work to run the win but I am proud to represent our group of drivers,» she said.

Increased visibility and female solidarity definitively allow more women into the profession. But Kusakabe sees deeper structural reasons for this new phenomenon in the Thai economy.

«There are less and less unskilled job positions. Low-paid jobs in construction and markets are filled by Cambodian and Burmese migrants. Street vendors are being shut down as part of municipal clean-up campaigns. The vendors’ existence is further threatened by franchises duplicating popular street foods,» she said. «Factory work is really difficult when you have children to look after. The service industry employs many women, but the income is very low. Thais no longer want to do the jobs they did before, but they don’t have the skills to find better work so they find themselves with few opportunities.»

Kusakabe added, «In times of crisis, men are less existentially threatened than women. They can go to vocational schools and learn a skill, like electrician or technician. Or they go back to the countryside where the government provides construction work for them. But there is nothing for women. Driving a taxi or a motorbike taxi is an increasingly attractive alternative, even as the sector cannot absorb all the women looking for work.» 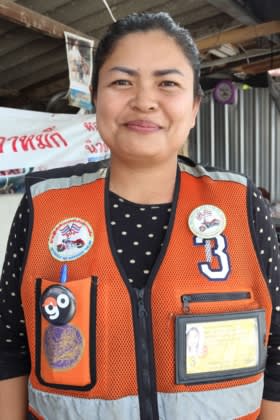 In a quiet part of Lad Phrao, Luksika Yathong is cleaning the noodles stall which she has been running with her husband for the past 15 years. The 36-year-old is about to get ready for her second job. Four years ago, the couple started to drive taxi motorcycles part-time to generate extra income to be able to pay for their sons’ education.

Luksika prefers to work outside the busy downtown areas such as Sukhumvit, Silom and Khao San Road. «There are more foreigners downtown, so there is a lot of money at stake. Here, we have fewer customers but we no longer have to pay the mafia to do our job.»

For years, drivers accumulated huge debts to pay extortionists, including police officers, for the precious orange jacket or would have to pay monthly bribes.

Former Prime Minister Thaksin Shinawatra implemented the first step to integrate the industry into the official economy in 2003, as part of his «war on dark influences». His government introduced a state-regulated registration system to curtail the practices that were choking the profession. Vests were issued free of charge. But following the coup which removed Thaksin in 2006, the control over motorcycle taxis slipped back into the hands of the mafia.

When Luksika and her husband started driving, they still had to pay 4,000 baht a month each to be able to work.

In May 2014, Gen. Prayuth Chan-ocha seized power in a coup, citing corruption as one of the main reasons for the overthrow of Thailand’s democratically elected government. Since then, the military junta has announced plans to once again reform motorcycle taxi services in Bangkok. According to AMTT data, a third of the city’s motorcycle taxi drivers are still not registered with the Department of Land and Transport.

Luksika has joined the motorbike taxi application GoBike which recently received approval from the DLT. The same authority is currently calling on the military government to ban apps like Uber and Grab. The DLT claims that the vehicles used are neither properly registered nor insured and that the payment system in place does not meet Thai regulations.

«If fully developed, GoBike could be a good and safe addition to the work at the win,» says Luksika. «Especially for women so we don’t have to stand in the queue all day. I will probably drive a motorcycle taxi as long as I work.» 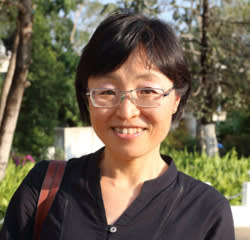 Back in On Nut, Kamokwan is not so enthusiastic. «We inhale so much pollution. The health hazards are always on my mind. I go to hospital every month to have my lungs checked.»

P’win make between 20,000 and 25,000 baht a month, or 700-800 baht a day — more than twice the amount they would take home from a factory job. But fast money has a price. According to the World Health Organization, Thailand, with 38 highway fatalities per 100,000 head of population, ranks second only to the Dominican Republic as the most dangerous place in the world to drive. Nearly three-quarters of Thailand’s crash victims are drivers or passengers on small motorcycles. All the women riders interviewed by the Nikkei Asian Review have had accidents. And while the bikes are insured, the drivers themselves are only covered by the informal fund of the win. That is not enough if they find themselves unable to drive for prolonged periods of time.

Motorcycle drivers struggle with the inherent paradox of entrepreneurship: its apparent freedom is desirable, while the day-to-day realities include an ever- increasing precariousness. Going it alone cancels out the factory boss but it also negate worker’s rights and long-term job security. In a society where everybody is their own boss, state and private companies are not obliged to fulfil their social responsibilities.

Kusakabe is worried that the hard won advantages Thai women enjoy compared to their counterparts in other Asian countries are eroding. «Women in Thailand have enjoyed decades of economic independence. They own land. Factories and companies prefer to hire women because they are seen as more reliable than men. In Asia, Thai women are in a good position, but they might lose that advantage if the job market is shrinking and if they are not provided social benefits like childcare.»

Back at street level, women like Somlit Lalert agree on the need for more recognition and acceptance. «We would like to have access to the same social benefits as government workers,» she says. «We provide a public service.»